Poomsae and the I Ching

Poomsae and I Ching. Think they aren’t related? Think again. They tie together like Yin and Yang, hand-in-hand, and I’ll explain to you why. First, though, allow me to introduce this term to you: I Ching. 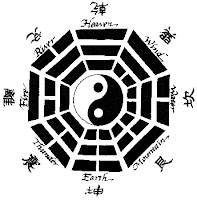 I Ching is an “ancient Chinese manual of divination based on eight symbolic trigrams and sixty-four hexagrams, interpreted in terms of the principles of yin and yang. It was included as one of the “five classics” of Confucianism”, I Ching, to me, represents peace, balance, and consistency. These three words can also be found in the art of Taekwondo, and more specifically, our Poomsae.

The I Ching relates to Poomsae philosophy. I went in circles trying to figure out how, and why, until I came to the best, simplest explanation of them all: “Each form is symbolized by a distinct philosophical component derived either from the I Ching, an ancient Taoist text, or personalities and places drawn from martial arts history”.

I think that the I Ching is an important component in Taekwondo. It brings realism and character to the martial art. The lines of the I Ching symbol represent the Yin and Yang: closed lines for Yang, and open lines for Yin. The Yin and Yang often represent two things coming together to make one whole, complete piece. I think this relates to Taekwondo. Two things in this art stand out to me: hard work and patience. Like the Yin and Yang, these two words can contradict each other sometimes. Hard work means you’re always ready to go, trying your best and not stopping. Maybe being aggressive. at some points. On the other hand, having patience can go a long way. You must have patience in everything that you do in Taekwondo, because it will never all come to you at once. You must be patient and be willing to step back, take a breath, and focus on what’s happening NOW. This can make things difficult for hard workers, and this is where Yin and Yang comes in. You must learn to balance the two to make one beautiful masterpiece: martial arts.

In conclusion, I believe that the I Ching has much to do with Taekwondo and its Poomsae philosophy. Both the I Ching and Poomsae require balance, peace, and time.