The Academics of Taekwondo

Tae Kwon Do is composed of many components, most dominated by physical qualities. Front kicks, round kicks, side kicks, hand and aerial techniques abound, endowing the national Korean martial art with its unique character. Yet, as the discipline matured from its humble beginnings in the 1940s and 50s, it gained both complexity and academic dimensions until today, modern educational institutes of higher learning located in Korea offer Taekwondology, along with its comprehensive syllabus of technique, tradition, rules and regulations, as a major.


Regardless of the fact that the roots of tae kwon do date back to antiquity, historians agree that the primordial forms of the art, then known as kong soo do, tang soo do and for a brief period of time, tae soo do, were heavily influenced by Okinawan karate-do coupled with Chinese chuan fa, Japanese judo and, to some degree, aikido and jujutsu. While in transition, ritual and practice fortifying the burgeoning discipline innocently drew breath from these styles.


Then, just as the citizenry of the Korean nation were given the opportunity to reestablish their cultural and technical infrastructure - admittedly after immeasurable strife and bloodshed - so too did tae kwon do. Rising like a phoenix from the ashes of war, the disparate styles that were to evolve into a single, standardized national treasure, took on its own identity within the pantheon of Asian combat disciplines. Distinctive skills and strategies featuring philosophical underpinnings exclusive to Korean culture clearly began to emerge during the latter part of the twentieth century. This process was not easy and came at great cost, both socially and politically, to many of its founders and the organizations they would come to create. Yet, today, tae kwon do stands tall as a battle-proven form of self-defense and a fully recognized Olympic sport boasting a growth curve second to none; all this is the span of a short sixty years.
Miracles of this magnitude cannot be accomplished purely on a physical level. Rather, planning, forethought and the accumulation of knowledge must be converted into action; action stoked by the uncorrupted transmission of wisdom across generations. Lessons learned in battle during the Silla (57 BC-AD 935), Koryo (918-1392) and Chosun (1392-1910) dynasties, exemplified by warriors of the Hwarang and preserved by fighting Buddhist monks called on to defend the nation against Japanese invaders, are as valid today as they were then. Couple these tactics with a contemporary understanding of physiology, sports medicine and body mechanics, and a valid blueprint of academic standards begins to materialize.
The academic approach to tae kwon do becomes abundantly clear as one sifts through the many editorial contributions offered by scholars, masters and enlightened practitioners dedicated to the worldwide proliferation of the art. Through the magic of the Internet, technique, decorum and training rituals have been exhaustively documented for current and future use. Books, treatises and dissertations have been written to intellectually support routines and principles. These, amplified by visual aids, amount to a supreme body of knowledge that can quite literally take a lifetime to absorb. Great men and women come to mind who have generously contributed to this paradigm of data - more than not, at little or no personal gain above that of serving the art. Highly qualified individuals such as Richard Chun, Sang Kyu Shim, Jane Hallander, Kyong Myong Lee, Son Duk Sung, Sihak Henry Cho, Stuart Anslow, TaeKwonDo Times columnist Karen Eden and Alex Gillis share this distinction with others too numerous to mention.
And just what is being documented that justifies tae kwon do as a discipline worthy of academic pursuit? First and foremost, the technical catalog that defines the traditional Korean martial art. General Choi Hong Hi, a primary founder who created the International Taekwon-Do Federation in March of 1966, claimed an arsenal containing 3200 separate techniques, each with its own distinct purpose and method of execution, many depicted in his fifteen-volume Encyclopedia of Taekwon-Do. Similarly, an updated version of the Kukkiwon Textbook reissued in 2005 devotes over 700 pages to the proper articulation of technique. But wisdom accumulated over the decades does not stop there. Landmark works by Grandmaster Richard Chun and his contemporaries portray defacto training standards and procedures relied upon worldwide by hundreds of thousands of students.
Moreover, since tae kwon do is recognized as a comprehensive form of self-defense with a pedigree reaching far back to the distant past, there are metaphysical and well as physical concepts to ponder. Exploring the use of meditation and ki, or internal energy development, as essential elements of the art demands research that can only be accomplished through the interrogation of Asian historical and, in some cases, medical records compiled centuries ago. Valid examples of these are the Yellow Emperor’s Inner Canon, a cornerstone of Traditional Chinese Medicine, coupled with the physical lessons posited by the Myue Dobo Tongji (Illustrated Manual of Korean Martial Arts), authored in 1790.
Then, not to marginalize their significance, if one is to accrue an absolute understanding of any classical martial art, then it is equally essential to survey influential native customs, physiological concepts that power its engine and moral doctrines that govern its use. Many of these can be found in the teachings of Confucianism, Taoism and Buddhism.
Clearly, taken as a whole the ingredients cited above compound to represent a body of academic knowledge profoundly worthy of transmission from one generation to the next. One only need embrace it.
Naturally, as with any established sport, there exists a majority of practitioners who will exclusively participate for competitive purposes only. And because tae kwon do offers much in the way of physical fitness and athletic recognition on the collegiate, state, national and international level, and because just as a coin, it exhibits two sides, one representing the game and the other the art, this is entirely understandable. Yet it is important to recognize the difference between cultivating athletes and holistically-trained martial artists - practitioners who are not only proficient in the ring, but who wholeheartedly welcome knowledge concerning the vast mosaic that is traditional tae kwon do.

Posted by Chosun Taekwondo Academy at 3:43 PM No comments:

Four years ago, the Lopez family was America’s best-known Taekwondo contenders in the 2008 Beijing Olympics. Not since 1904 had three siblings competed in the Olympic Games for a team, even less for one sport. The Texas brothers and sister were thus knighted as “The First Family of Taekwondo.” Steven and Diana both took home bronze, while Mark snatched up a silver medal. Big brother Jean served as the anchor and coach.
Read more »
Posted by Chosun Taekwondo Academy at 9:18 AM No comments:

The 2012 tour was another unbridled success. Tedanhi 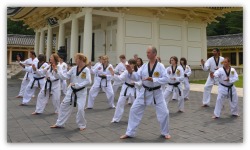 Kamsahamnida to all tour participants, family members, friends and fellow students at home who followed us online! It is not too early to consider making a dream come true in two years by reserving your place on the 2014 Chosun Korea Training & Cultural Tour.
If you missed the Korea Travelogue, click on the site below for photos, maps, stories and more from the 2012 Chosun Korea Training & Cultural Tour. Subscribe to receive more updates and photos as they are added.
2012 Chosun Korea Tour Travelogue
Read entire newsletter

Posted by Chosun Taekwondo Academy at 9:49 AM No comments: 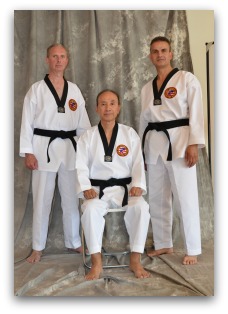 Monday June 18, 2012
Fort Lee, NJGrandmaster Richard Chun, Master Doug Cook and Master Fred Kouefati met for an extensive one-day photo shoot that would yield vibrant illustrations for the soon-to-be-published book Taekwondo Black Belt Poomsae: Original Koryo & Koryo, offered by YMAA Publications of Boston. With a release date of autumn 2013, the prime subject of the work as the title denotes, revolves around two Korean-based poomsae, or formal exercises as they are generically known.
(excerpt from upcoming article, A Photo Shoot for the Ages by Master Doug Cook)
Click image for more photos
Read entire newsletter
Posted by Chosun Taekwondo Academy at 9:41 AM 1 comment: