The Vital Role of Meditation in Tae Kwon Do

Observing a martial artist seated quietly in a meditative posture bears little resemblance to the skilled defender most assume him to be. Meditation, however, plays a vital role in preparing the taekwondoist, both mentally and spiritually, for the demands of self-defense, the benefits of ki development, and a potential leap in performance through the practice of visualization.


In order to act rapidly in the face of a threat that has escalated beyond verbal mediation, the mind and the body must react rather than anticipate; this important principle lies at the core of traditional defensive strategy. Making the false assumption that an attacker will execute a punch when, in truth, his intention is to kick, is certain to result in severe injury to the defender. To appreciate the value of meditation as it applies to this component of self-defense, one needs look no further than the stillness of a serene pool of water reflecting the image of a full moon. Because the surface is unbroken by ripples, the image is pure and undistorted.  The mind of the martial artist can be conditioned to act in a similar fashion. Through the sincere and diligent practice of meditation, the taekwondoist will develop an uncanny ability to react to an unprovoked attack rather than anticipate a potential false move. How is this possible? The mind, like an unbroken stallion, has a proclivity for galloping away when left to its own designs. Thoughts of daily activities, bills, work or school, all have the ability to intrude on a tranquil mind. Great effort is required to focus on stillness, emptiness. Nothing, no mind, or mushin, is what the martial artist seeks. Mushin is the mental state where one is unhindered by preconception. Yet, as difficult as this stage of consciousness may be to achieve, we do have an ally in our quest. Just as the Asian warriors of the past, who walked a razor’s edge between life and death in the service of their king, meditated before battle, we too, as modern day warriors can relieve the dangers of anticipation by cultivating a clear and tranquil mind. However, there are many types of meditation. Which is appropriate to achieve the result we desire? One approach my students and I practice at the Chosun Taekwondo Academy as a preface to our training consists of sitting cross-legged in the half-lotus posture on a folded blanket to promote comfort. The hands are positioned in a gesture known as a mudra, a Sanskrit term meaning to seal or authenticate.  Again, there are a variety of mudras, each intended to amplify or authenticate a spiritual concept. The cosmic mudra, where the back of the right hand is placed in the palm of the left hand (reverse for men), thumbs touching, is a simple and effective mudra to begin with. Make a perfect oval rather than permitting the thumbs to create a “peak” or the palms to collapse into a “valley”. Let the hands gently rest in the lap, close the eyes and sit erect with the nose in line with the navel. Aside from allowing for a smooth exchange of breath, this posture will encourage a free flow of ki, or internal energy, to circulate throughout the body. Using the breath as a focal point, slowly inhale through the nose and exhale through the. Invariably, as you meditate, stray thoughts will attempt to invade the mind; briefly acknowledge these feelings and permit them to pass through your consciousness, all the while returning to your breathing. Assign a single count to each cycle of inhalation/exhalation. Count to ten only and then return to one. Eventually, with patience and time, you may be able to abandon your counting altogether and simply focus on the breath. This basic method of meditation should serve to calm the mind prior to training and partially eliminate the distraction of anticipating rather than reacting.

Moreover, enhancing the flow of ki throughout the body is yet another objective of meditation. Why is this abstract action important to the martial artist? The manipulation of ki, the universal life force, can be used for both benign and punitive purposes. For instance, in order to promote health, the practitioner of kiatsu, or ki therapy, messages the various acupoints along the body to stimulate ki flow; when an abundant amount of ki is present, a sense of well being is experienced, when it is deficient, illness results. The taekwondoist, on the other hand, channels ki to a specific part of the body with the hope of amplifying technique and to prevent injury. This requires long practice but can be addressed through meditation and breathing exercises. While inhaling and exhaling, place your hands on your abdomen. What do you feel? When you breathe in, the abdominal area should expand; likewise, when you exhale, the abdominal area contracts. This process is commonly known as normal or Buddhist Breathing. Now, make a conscious effort to reverse this sequence, allowing the opposite to occur where the area surrounding your tan-jun, or ki center, two inches below the navel, contracts during inhalation and conversely expands when you exhale. This style of breathing is referred to as reverse or Taoist Breathing and represents an ancient method by which your breathing acts as a pump to move the flow of ki throughout a series of pathways or meridians traversing the body. This practice coincides with the last mission of meditation which entails visualization. Sitting in the meditative posture described above, and employing the Taoist Breathing method, visualize taking in a fresh, clean stream of ki through the nose as you inhale and releasing a cloud of dark, used ki similar to smoke, as you exhale. Following this meditation exercise, the body should feel revitalized and ready for vigorous practice. At some point you can imagine lifting the ki from the tan-jun and mentally transporting it to various parts of the body. As a cautionary note, Taoist Breathing can have ill effects if used excessively and should only be practiced for short periods of time.


Lastly, visualization during meditation can also be used prior to promotion tests and competitions as a precursor to success. It is not uncommon for the Olympic competitor to mentally “see” him or herself performing flawlessly while meditating before the actual event. Similarly, the martial artist can step through the requirements of a belt test while in a meditative state and hopefully reduce the stress intrinsic in the actual examination.


Clearly, the practice of meditation presents great benefits for the taekwondoist and should be a part of every style’s curriculum. Sadly, meditation is often overlooked due to its metaphysical nature except in schools addressing the more traditional aspects of tae kwon do. Nevertheless, the reward of adding a meditative component to your training is obvious and should be explored with a qualified instructor.
Master Doug Cook, a 6th dan black belt, is head instructor of the Chosun Taekwondo Academy located in Warwick, New York, a senior student of Grandmaster Richard Chun, and author of three best-selling books entitled: Taekwondo…Ancient Wisdom for the Modern Warrior, Traditional Taekwondo - Core Techniques, History and Philosophy, and Taekwondo–A Path to Excellence, all published by YMAA of Boston. Master Cook and Grandmaster Chun have recently completed a new book focusing on Original Koryo and Koryo poomsae targeted for publication in July of 2013. Master Cook can be reached for lectures, workshops or questions at www.chosuntkd.com or info@chosuntkd.com.

Paging through the Kukkiwon Textbook many years ago, a comprehensive volume originally published in 1975, I took notice of a severe looking martial artist chosen to model the technical attributes of taekwondo by virtue of his long experience and skilled attention to the art. Again, in 1998, this accepted standard-bearer recognized for his extraordinary acumen, would appear in a promotional video produced by the Organizing Committee for Taekwondo Korea 2000 as a staff instructor. Seeing who I eventually came to know as Grandmaster Gyoo Hyun Lee in motion rather than on the printed page, convinced me all the more that I would someday seek out his instruction.


As destiny would have it, this was more difficult than expected. In planning the 1999 Chosun Taekwondo Academy Korea Training & Cultural Tour partially sponsored by the Committee, I inquired if Grandmaster Lee would be one of our teachers as advertised, but was informed that his schedule did not coincide with our visit. Likewise, in the initial planning stages of our 2004 tour, I once more requested his talents directly; “Unavailable” was the response from Korea and so, disappointedly, I turned my gaze elsewhere. Then, a few short weeks before departure, I received a surprise email from our travel service stating that the grandmaster had accepted our group provided we allow his senior instructors to assist. Naturally, rather than a condition, this stipulation amounted to a bonus. Since then, I would not consider developing an itinerary without including a day of training with Grandmaster Lee.
To read entire article, subscribe to Totally Taekwondo Magazine
Posted by Chosun Taekwondo Academy at 11:12 AM No comments:

Read this heartfelt letter written to the Warwick Advertiser by Claire Gabelmann, Chairperson for the Warwick Lions Club Holiday party for Community Children in Need

"It is a privilege"

For several years the students of the Chosun Taekwondo Academy in Warwick have been some of the strongest supporters of the Warwick Lions Club Holiday Project for Children in Need.

They held fund raisers all year long, such as book sales and coin drives, to raise $2,800 which was enough money to sponsor 37 of the 100 children who were served by this effort.

In addition, they purchased $400 of gift items which were used in the holiday “shop” where local children in need chose gift for their families. The students and their parents shopped for clothing, shoes and toys for 37 children.

On the night before the event, they donned elf hats to decorate the venue and set up the “shop.”
Read entire letter:‘It is a privilege' | Warwick Greenwood Lake NY | Letters to the Editor
Posted by Chosun Taekwondo Academy at 10:43 AM No comments: 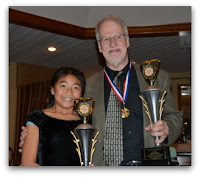 Dear Martial Arts Enthusiast,
Welcome to the December 2012 edition of the Chosun e-newsletter. The past few months have been some of the busiest on record at the Chosun Taekwondo Academy. Highlights include the 2012 Chosun Korea Cultural and Training Tour, the USTA Seminar with Grandmaster Richard Chun and the inspiring bi-annual Black Belt Tests. The culmination of the year is our 15th Annual Chosun Taekwondo Academy Awards Banquet and Dinner Dance. As full of events as this year has been, the new year promises to be packed with exciting offerings as well. Read information below about upcoming overseas training opportunities, book releases and more.
Chosun wishes you and your family a safe and wonderful holiday season!

Read the entire newsletter...
sign-up for FREE monthly Chosun newsletter on our homepage
Posted by Chosun Taekwondo Academy at 7:00 AM No comments: