"Mrs. Pyke Eats Korea" can be seen every month
in the Chosun Taekwondo Academy newsletter
This column is from the March, 2016 newsletter

Jeon, Korean Pancake
When we say let’s have pancakes we envision fluffy stacks, dripping with butter and maple syrup. Strawberries, blueberries and whipped cream! A hot cup of coffee and the New York Times. Say let’s have pancakes in Korea and it’s a “Savory” heaven. Potato, Kimchi, Scallion and Seafood, always served with a soy and vinegar dipping sauce. Nothing could be more satisfying than a Jeon, Korean pancake. 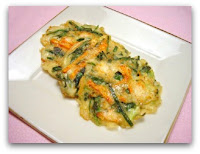 Jeon (pancake) can be prepared as one large pancake to share or tiny bite sized medallions. Usually served as a snack with beer or as a side dish (Banchan).
One of my favorite memories of eating Jeon was on our Korea 2012 trip. We arrived at a small roadside restaurant that served only Jeon. The placed was filled with boisterous families enjoying beer and Jeon. They were so surprised and delighted to see this huge crowd of Americans descend upon their local Jeon hot spot! The fathers at one table were pretty much three sheets to the wind and kept toasting us over and over again! We all sat at a traditional low table on the floor and enjoyed an amazing time and meal.
We enjoyed three types of Jeon. A large Gamjajeon (Potato Pancake) was served. So different than a crispy shredded potato pancake that we are accustomed to, served with sour cream and apple sauce. The Gamjajeon are made with a raw potato puree and scallions and sauted till golden on each side. They are so chewy and gooey at the same time. We were then served Pajeon (Scallion Pancake). It was divine. Loaded with whole scallions and a small amount of a flour and egg batter. These are also sauted till golden brown. Last but not least, Haemul-pajeon, Seafoo Scallion Pancake. Super yummy and loaded withsquid and shrimp. This is one of my favorites and you will see this pancake served at almost any Korean restaurant in the U.S.A. As I mentioned before the Jeon is served with a soy sauce and vinegar dipping sauce.
Any vegetable such as zucchini that is coated in flour and dipped in egg is considered a pancake in Korea. I would say close to every meal we ate in Korea was served with Ban Chan (all the little side dishes) and Jeon was always one of these dishes. We had the Hobakjeon (zucchini pancake) many times and also Dongtaejeon (Pollock Pancake). This was a favorite of mine. A Korean fish fry!

Posted by Chosun Taekwondo Academy at 10:42 AM No comments: