Integrity is how someone lives his or her life. Everyday we face choices that only each of us can answer for ourselves. We decide how we run our own lives, and that defines who we are. It's having a set of values and choosing to do the right thing versus the wrong thing.
Merriam-Webster defines integrity as:'
1. firm adherence to a code of especially moral or artistic values: incorruptibility
2. an unimpaired condition: soundness
3. the quality or state of being complete or undivided: completeness

There are many ways to live a life of integrity; however, being honest in what you say and what you do is a big part of it. Speaking up and sharing your opinion can be difficult because when you share your opinion, you share a part of yourself. You are trusting others to respect your opinion, even if it is different than theirs.
Speaking up against bullying is a way to show integrity. It is the right thing to do though it isn't always the easiest. When someone is a victim of bullying, they feel alone because they feel like no one can stop the bullying. I wouldn't want anyone to feel that. I wouldn't want one of my classmates to feel so alone when I could speak up. It's not easy because speaking against a bully makes you a target. I know I have strong relationships with my family and friends, the other kid might not. By speaking up, I can become a part of that kid's support system.
By living a life with integrity, I hope to become a person of courage, honesty and compassion.
Posted by Chosun Taekwondo Academy at 11:56 AM No comments:

The Meaning of Respect and how it Relates to Taekwondo

Respect means a care that you carry for people, yourself, places and things. Respect mean listening and following directions. It's allowing what you do to be done. I show respect in my life when going to Chosun. I respect Chosun because it is my Tae Kwon Do school. I show 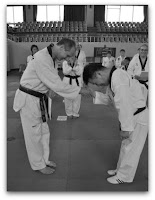 respect there by bowing to people and wanting to go to Tae Kwon do. I dress in my dobok and never drag my belt; I remove my shoes before entering the dojang and put them away on the shoe rack. I listen to people when they are talking to me, also. Another way I show respect is to myself. I allow myself to be myself and that is a type of respect. I think  everyone should show respect to themselves and other people.
Posted by Chosun Taekwondo Academy at 11:47 AM No comments:

I am amazed that in a few weeks I will be at the halfway point between the white and black belt. I still feel so new. In fact, I am still adjusting to not being in the last row.


There is comfort in that last row. Comfort in knowing you are the newbie and can make mistakes.  Not that you feel that way at the time, but just as a child fears the expectations of the next grade, there is the anxiety that comes with the added responsibilities of a higher belt.
On the other hand, many things come easier. When I tried and failed to do a front kick with a ball of foot as a lower belt, I was told not to worry - that would come later. What do you know?  I did a front kick with a ball of foot last week. Today Instructor Garrett emphasized the importance of a reaching stretch we were doing; he noted that it helps with the ball of foot kicks.  Amazing.  The stretches in class must have enabled my body to make the move.  Slow and steady. Patience. Progress.
I have also gained confidence in my ability to meet each belt requirement. I now have overcome enough obstacles that I have faith that with hard work, I can and will achieve the next belt. This self-efficacy has allowed me to relax more when I struggle with new movements. It is my hope that as I continue in rank, I will also be able to approach the belt tests with less anxiety.
The more I learn, the more I realize there is to learn. But isn’t that true of all the most valuable pursuits? Instead of feeling overwhelmed by the sheer amount of knowledge to be mastered, I have gained an appreciation for the endless amount of lessons to be learned (I must admit the Korean language component is still daunting; foreign language has always been my worst academic area).
I am enjoying blue belt. Besides the fact that it is the most striking color (my favorite), it has also been a time to reflect. Moves are coming a little easier. Connections between previous and present learning are beginning to become apparent. And the poomsaes are relatively short and fun. While I look ahead with trepidation, I also know that is part of the process for moving forward.
Posted by Chosun Taekwondo Academy at 11:33 AM No comments:

How Taekwondo has Influenced my Life

A Meditation on Growth: Midway Between White and Black Belt

I’ve been thinking about our butter knives. We keep them in the horizontal section of our silverware organizer in an allocated drawer. Like the dinner and dessert forks and serving and table spoons, they have their place. Everyone agrees to store them in standard fashion with the handles facing south and the tips facing north. Yet, when it comes to the butter knives no such concord exists.
I use the law of common sense: handles should face east. After all, in our family everyone is right handed; this should make things easier, more natural. It’s a minority opinion. Still, I wage a silent war, returning the knives time and again to their “natural” position, despite knowing the very next time I pull out the drawer, west-facing handles will stare at me with unabashed mocking and converts will follow until order is wholly abandoned. Should I stage a protest? Post signs? Hand out pamphlets declaiming the benefits of handles facing right (No smudged blades! No hyperextended wrists!)? Forget it. I’ll ban butter knives altogether—and extend the battle to include the marauding crumbs who invade every nook and cranny.
Kidding aside, it’s not really our butter knives I’ve been thinking of, but how they relate to a central tenet of the um-yang: the acceptance of constant change, how change is inevitable, even in the silverware drawer, and how closing yourself off to change closes yourself off to possibilities, to openness itself. If a knife handle faces left, my left hand is available. My youngest daughter easily points this out. Ah, I think, beginner’s mind, infinitely open. And, it’s true. I have two hands; I may as well use them.
Change one part of your life and you change in myriad others. It’s been nearly a year since I crossed the threshold of the dojang floor. From the outside I look about the same, though, perhaps, I’m a little more toned. I remember doing ten push ups that first morning all belts class. It took me so long. From the dazed looks of the other students’ faces when I’d finished I had the feeling they’d been watching me for quite some time. Nevertheless, I’m used to push ups now and can roughly keep pace for twenty to thirty in a set.

Meditating on constant change is natural, as with every belt level change marches forth with a strong, sequential cadence: new kicks, strikes, self-defense techniques and poomsaes—and the challenge to build the whole of them into a integrated repertoire. Doing well requires focus, intention, practice and a willingness to be loose, flexible, adaptive. In other words, being willing to grow. I have always been willing, but I have never taken growth so seriously as I have in taekwondo. To the contrary, I have often lived my life like a leaf in stream, perceptibly content to either flow swiftly with the current or ensnare myself in the debris of a bend.
It’s been only a year. Change manifests itself subtly and overtly. I’m more engaged in life, more relaxed, more willing to surrender ego in the service of a broader confidence, less anxious and less likely to become entwined in the emotional vortexes that arise from within and without. My ability to focus has increased. I’m faster in the kitchen, faster with domestic chores, more efficient overall. When I toss something in the trash, I often hit the basket. In the dojang, I’m comfortable among fellow students, comfortable with the hierarchy and routines, more willing to learn through mistakes and failure. Beyond this, I sense within myself an opening, a deeper understanding and appreciation of life’s flowing nature.
Taekwondo inspires within me a reckoning. What are my intentions? Am I present with them? Fulfilling them? Ignoring them? Taekwondo keeps me, if not on, then mindful of the path, and the path is life itself. If life is a river, I need not be a leaf but a tree, deeply rooted in the stream, withstanding the gush of wind and rain, contemplating stillness and calm, accepting the changes that come and go. I suspect the further I go with taekwondo and the sincerity of my practice has much to do with the perspective through which I approach all of life. What I do within the dojang, and the consequent contemplations of my mind flows outward into everything else. In-class meditations inspire me to learn about and meditate on my own; sporadic interest is manifesting itself into a routine, focused practice.


Some kicks require jumping. Yop chagi (side kick) requires a torque of the hips unnatural for many my age, myself included. Knife hand, executed properly, is entirely foreign. Yet, having an open mind and a willing spirit, I know I will persevere. Physical changes, physical challenges. When you change something outside, it changes something inside. Physical challenges induce resilience and strength. Between inner and outer life, there is no distinction. One mirrors the other. I may not be the fireball of reckless daring I once was—recklessness is a folly of the young!—but my spirit remains; it burns strong. I can kick. I can jump. I won’t just persevere. I will succeed in all the ways it’s possible. One thing flows into another; change is with us always. Crisscrossed knives, missing forks, the rosebud spoon of unknown origin. Accept change here and you can accept it elsewhere. You won’t need to stop and wonder what silverware has to do with taekwondo. You’ll already know. Nothing. Everything.
Posted by Chosun Taekwondo Academy at 10:57 AM No comments:

Yoga at CHOSUN "Effort and Ease"

Posted by Chosun Taekwondo Academy at 10:35 AM No comments:

Yoga at CHOSUN " The Power of One More Breath"

Posted by Chosun Taekwondo Academy at 10:28 AM No comments:

Yoga at Chosun "Patience and Practice

Posted by Chosun Taekwondo Academy at 1:14 PM No comments:

Welcome to the August edition of the Chosun Taekwondo Academy e-newsletter! As the summer winds down we are looking to September and the 18th annual CHOSUN OPEN HOUSE. See details below...and PLEASE HELP SPREAD THE WORD! Kamsahamnida!
Don't miss our first advertiser, The Tokyo Plum House, with a special offer exclusively for CHOSUN students... see information below...