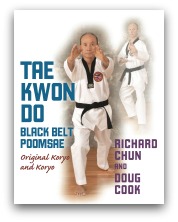 Release Date: July 1, 2013YMAA Publications, Inc
Owing to the extensive reputation of Grandmaster Richard Chun as a modern day taekwondo pioneer and Master Doug Cook's prolific and award winning writing on the subject, this new book promises to be a landmark treatise for taekwondo practitioners worldwide.


Not long ago, my wife was speaking with the editor of our local newspaper regarding a recently submitted press release describing a public-service event hosted by the Chosun Taekwondo Academy Leadership Team, a group of young individuals who routinely engage in elevated training, provide community service on a regular basis, and utilize the virtues of tae kwon do as a vehicle to promote leadership skills.


During the course of the conversation, the editor praised the group for their tireless efforts in assisting the underprivileged and further recognized the fact that this was not the first time he had received such a bulletin publicizing our outreach program. Additionally, he was quick to note that local community leaders and citizens in concert take heed of the good deeds propagated by our students, all done with a minimum of fanfare.


Then the conversation took an interesting turn. While not coming out directly and saying so, he juxtaposed our group against various sports teams in the area whose primary mission is to dominate on the playing fields often at the cost of the very virtues supported by traditional tae kwon do training. While these entities often strive to stimulate charitable contributions as well, they do so obliquely without recognizing the noble engine that drives the process of compassion, and thus philanthropy, albeit in a benign manner. He then went on to summarize this notion by uttering the phrase “not everything needs a ball”. Given the huge popularity of varsity sports and the attention they are given by the local press, I was astonished by his comment.


At this point, I should mention that I personally have never been a sports enthusiast and, in truth, find many of the emotions elicited by such pastimes distasteful at best. By way of example, whether it be taekwondo as a sport, football or little league baseball, the unbridled actions of overzealous parents in distorted support of their offspring during the competitive process, frequently borders on riotous conduct. This atmosphere of behavior is not what we are attempting to cultivate in the traditional martial arts and to hear a man of erudition encapsulate this concept so succinctly was heartwarming indeed.


I am certain many readers will take exception with my point of view; especially those with children who participate in a variety of extra-curricular activities including those mentioned above. But it is the heritage of the Korean martial arts that stimulates the concept of giving back to ones community just as the ancient Hwarang warriors did when not occupied by battle. In my opinion, tae kwon do training undeniably represents nobility in motion. Every class is tempered with courtesy, humility, compassion and purpose. And for youngsters whose minds and hearts are uniquely open to suggestion, this is paramount.


Quite naturally, those unfamiliar with the discipline will argue, and understandably so, that tae kwon do resonates with aggression and violence, offering no socially-redeeming qualities whatsoever. And on the surface, this may be true. But if one were to take a closer look under the hood, milestones in the elevation of character will be revealed…all this minus the competitive mindset and barely masked hostility, often fostered under the guise of team sports.


As instructors of tae kwon do, we frequently say that “the only person you are competing against is yourself.” And for the most part, this is accurate effectively removing it from the fundamental doctrines of sport. Practitioners, of any age, sincerely seeking an enhanced lifestyle gradually alter longstanding habits of a questionable nature in favor of those that bolster integrity, compassion and discipline; traits that go hand in hand with cultivating an empathic worldview. Upon closer investigation, we see the long shadow cast by Confucianism on this process. Since traditional tae kwon do is influenced by the three Asian philosophical paradigms including Taoism, Buddhism and Confucianism, this is understandable.


Confucius, or more correctly K’ung Fu-tzu, espoused the cultivation of the “superior man”, one who is aware of his or her unique place in, and responsibility to, society at large. Furthermore, he taught that a single individual can influence world events through the simple projection of a benevolent state of mind. The Korean proverb, su shin je ga chi guk pyong chun fa, supports this philosophy. Loosely translated, this dictum states that, “peace within the individual brings peace within the family; peace in the family brings peace in the community; peace in the community, peace in the country and, ultimately, peace throughout the world.” As improbable as this may sound, there is little doubt that compassion towards fellow human beings goes a long way. Rather than being isolated in a vacuum, correct action ripples across humanity with much the same effect as would a pebble when dropped into a serene pool of water. Following this path leads the individual to develop a sense of purpose and harmony within the community.


Moreover, it should be remembered that the martial arts of the 21st century are significantly different from those practiced centuries ago. While self-defense remains the core purpose of practice, enrichment of character has evolved as a central theme as well. This metamorphosis began during the late 19th century with the creation of disciplines such as judo and karate-do by Gigoro Kano and Gichen Funakoshi respectfully. Martial arts intended to sustain a warrior on the field of battle became martial ways, or do, with the added benefit of building physical fitness, nationalism and morality in youngsters and college students alike. For the most part, with the exception of combat sport and MMA, this concept continues on today as the standard model in contemporary martial arts education. From this, it is not difficult to perceive the connection between a desire to improve the lives of others through community outreach and the virtuous tenets of traditional tae kwon do including courtesy, integrity, perseverance, self-control and indomitable spirit.


Lastly, while sport and all its trappings can provide an outlet for aggression and create social bonds by way of teambuilding, they all, by definition, are restricted to a set place and time. Meanwhile, the robust philosophical foundation that acted as a code of honor for the Hwarang continues to support traditional tae kwon do in the new millennium and remains as valid today as it was in the seventh century when these noble warriors sought moral wisdom beyond the zone of combat.


Ultimately, the modern martial artist, of whatever age, should not only be physically fit and adroit in the ways of self-defense, but in addition, become a beacon of strength and courage for family, friends and those less fortunate than he or she. By extension, enriching ones community through programs of systematic outreach, particularly by young practitioners, proves beyond a doubt that “not everything needs a ball” to provide a sense of self-worth coupled with community spirit. The above, amplified by an element of self-respect, is what it means to be a true modern day warrior clad in the armor of virtuous action, tailored by a earnest study of traditional tae kwon do.

Posted by Chosun Taekwondo Academy at 10:12 AM No comments:

Chosun Belt Promotion Test
Sunday August 19, 2012
The Chosun Summer Belt Promotion Test was the largest to date and was a testament to the perseverance it takes to be proficient in the art of taekwondo. From white to black belt, students demonstrated high levels of skill, technique and focus. Congratulations to all Chosun students. Special THANKS to Chosun instructors, Master Gary Stevens and Master Joseph Preira for officiating.

Click image for more photos
See a video
Read entire newsletter
Posted by Chosun Taekwondo Academy at 8:17 AM No comments: