article by Jeff Rosser, appeared in the Chosun Taekwondo Academy  March 2016 newsletter
Gyeongbok Palace
Gyeongbokgung, or Gyeongbok Palace, is the largest and quite possibly most well-known palace in all of Korea.  Located in Northern Seoul, this palace stands as a reminder of the greatness of the Joseon Dynasty.  Not only was it a palace, but it was also like a city unto 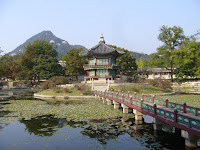 itself and was one of the first major structures built in Hanseong, modern day Seoul, which was the capital of the Joseon Kingdom.  This palace was constructed in 1394 by King Taejo who was the founder and first king of Joseon.  Since its construction however, the palace has been destroyed multiple times over the past 425 years by the Japanese.  As a result, many of the buildings standing today are newer restorations of the palace’s former grandeur.

Located in the Gwanghwamun neighborhood of Seoul, this palace is easy to get to, is nearby numerous other sites and museums, and features a breathtaking backdrop with Bugak Mountain rising over the palace from the rear.  To get to Gyeongbokgung, take Seoul Subway Line 3 to Gyeongbokgung Station and go to exit 5.  The palace is closed every Tuesday but is open on most major holidays.


Jeff W. Rosser is a teacher, martial arts instructor, and writer in South Korea.  He’s a former AAU U.S.A. National Karate Team member and has competed internationally in Karate and Taekwondo.  He also has over 24 years of experience in Karate, Taekwondo, Hapkido, Ju-Jutsu, and Judo.  He’s a columnist for Taekwondo Times (“The Hidden Art”), a monthly contributor to Totally Taekwondo Magazine, and the author of “Combative

Read entire newsletter
Subscribe at: www.chosuntkd.com
Posted by Chosun Taekwondo Academy at 6:14 AM