Imjingak
Imjingak, located on the Imjin River near the city of Paju, is a park near the border with North Korea.  For most people, this is as close to North Korea as you can get without joining a guided tour to the DMZ which South Koreans are not allowed to join.  From the 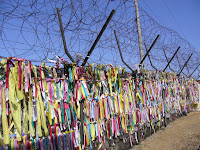 observation deck here, you can see across the Imjin River to the DMZ and even into North Korea.  The park also has numerous monuments and memorials to those who have served and died, to the families that remain separated, and to the continuing hope for peace and reunification.  Amongst the monuments are also a number of relics from the Korean War and the Cold War which include tanks, war planes, and a UN supply train from the Korean War that is riddled with 1,020 bullet holes.

The Freedom Bridge, which was built as a temporary crossing over the Imjin River for the purpose of bringing home more than 12,000 South Korean POWs after the signing of the Armistice Agreement, is also here.  It was relocated to this spot to serve as a memorial and now sits next to an old railway bridge that stretches across the river and into North Korea.  Also near the Freedom Bridge is the Mangbaedan Altar which was constructed by the South Korean government in 1986.  This permanent altar was created for North Korean refugees and South Koreans with family in the north to carry out ancestral rites during major holidays like Chuseok and Lunar New Year.  Prior to the building of the altar, visitors would create their own each year.  Now, they have a permanent altar from which to carry out these rites.  The altar itself consists of an incense burner and seven stone slabs, each carved with an image representing each of the seven provinces in North Korea.
You will also find what is likely to be the most colorful barbed wire fence in the world.  Visitors, both Koreans and foreigners alike, write messages of peace, reunification, and reconciliation on ribbons and attach the ribbons to the fence.  While interesting to look at, the ribbons are also a reminder of the effects and pain felt by the division of the Korean peninsula.  To reach Imjingak, take a train from Seoul Station to Munsan station.  From there, transfer to another small train to reach Imjingang Station.
About the author:

Jeff W. Rosser is a teacher, martial arts instructor, and writer in South Korea.  He’s a former AAU U.S.A. National Karate Team member and has competed internationally in Karate and Taekwondo.  He also has over 24 years of experience in Karate, Taekwondo, Hapkido, Ju-Jutsu, and Judo.  He’s a columnist for Taekwondo Times (“The Hidden Art”), a monthly contributor to Totally Taekwondo Magazine, and the author of “Combative Elbow Strikes:  A Guide to Strikes, Blocks, Locks, and Take Downs” published by Turtle Press.  Contact:  karatekajwr@yahoo.com (Email), www.mawriter.webs.com (website)

Read entire newsletter
Subscribe to monthly newsletter on the Chosun homepage
Posted by Chosun Taekwondo Academy at 5:06 AM