Disciple. To most, the word conjures up vivid images of religious devotion or a pious commitment to a spiritual icon or canon. And well it should since the concept defines a symbolic marriage between novice and mentor, a spark of intention to an ideal. But, most importantly, as it applies to taekwondo, this connection can be construed as an unimpeachable union between loyal student and venerable master.


When we think of the term disciple, many Westerners visualize the Twelve Apostles of Christ, also known as disciples. Yet, viewed from the standpoint of the practicing martial artist, this comparison is not too distant from its sacred use. 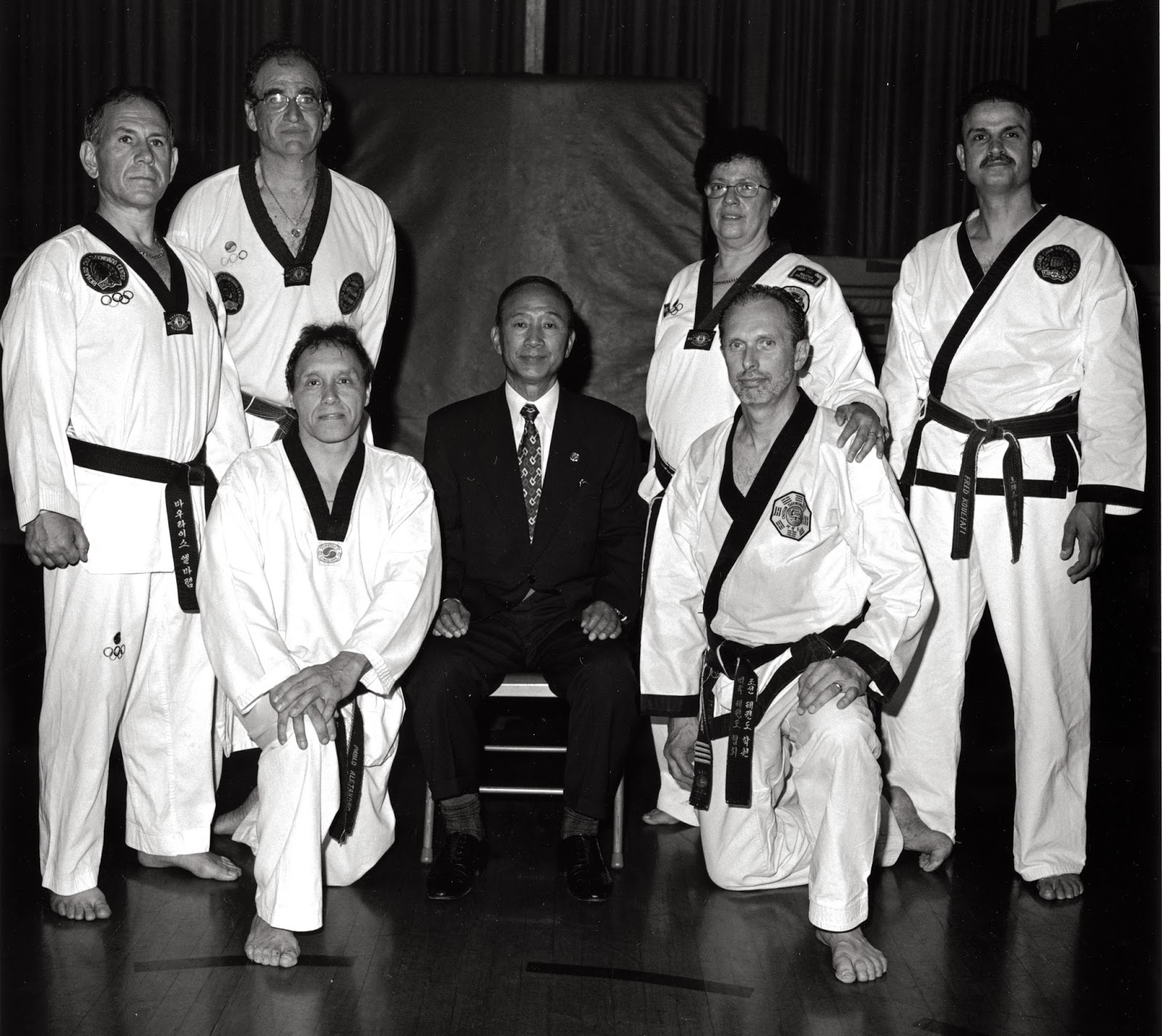 Taekwondo, or foot-fist-way, is first and foremost a traditional martial art and world sport. It is not in any way, shape or form a religion even though it has been influenced by the three Asian philosophical paradigms of Buddhism, Confucianism and Taoism. Nevertheless, several of the almost superhuman individuals responsible for founding the discipline – men, in this case, who sacrificed almost everything to promote the Korean martial arts in their formative years - clearly deserve dutiful fidelity just as in the context of a religion. Equally deserving, are the remaining, living legends who continue to carry the torch of tradition forward.


Why is this? Why would anyone in this day and age sublimate themselves and, in some cases, even forfeit, their own energies in the service of another? And, having done this, what are the benefits, if any.


In its current iteration, traditional taekwondo can be thought of as a direct reflection of modern society’s quest for a ritualized entity, devoid of religious dogma, but complete with a physically and spiritually enhanced set of ethical principles by which to live. It satisfies an innate desire for a clear path to achievement while softening the competitive impediments imposed by the workplace, scholastic institutions or the gaming fields. Moreover, as one travels through the belt ranks, the profits revealed by focused training almost certainly alters the student’s life in a profoundly positive, yet frequently surprising, manner: practice mimics a mirror - on the one hand highlighting strengths, while on the other, reflecting weaknesses that beg correction. Intense introspection of this nature never fails to arouse passions and emotions that have been buried by age, self-imposed isolation or cynicism compounded by an egocentric worldview. The notion that martial arts training, particularly when experienced by adults, can have a significantly restorative effect on the individual is not uncommon.


So it stands to reason that almost any system catering to the cultivation of the physical and spiritual self, will spin off personalities that embody the ideological foundation of the whole; those who symbolize the human incarnation of doctrine and exemplary physical practice. Consequently, the purveyor leading one on this transformative path can, for better or ill, assume almost messianic proportions. To the sincere martial artist whose desire for excellence is pure, this presence is manifested in the form of a master or grandmaster and it is to this person that a pronounced, yet appropriate, homage is paid.


While, as a rule, monthly tuition is paid in return for instruction, this often meager fee can never truly compensate a master adequately who earnestly and selflessly wishes to pass on a genuine martial inheritance. Subsequently, it is not unusual for the master to remain vigilant for a student who stands out, prepared to receive direct transmission of skill. Those that exhibit the elevated standards that satisfy the expectations of the senior, at some point, may come to be considered a disciple. It is clear that these individuals are few and far between. While the undeserving grasp desperately for a position of singular recognition and advanced transfer of often hidden knowledge, sometimes stepping on the backs of others to do so, it can only be those possessed of pure intention, extraordinary patience, unblemished humility and unshakeable devotion, who will reach the summit.


The disciple is differentiated from the average student in that they seek the deep philosophy, customs, etiquette and history associated with the art, in conjunction with physical technique. The implied code of honor governing unprovoked use of lethal skill is intricately woven into their moral fabric. With nothing whatsoever casual about their practice, the disciple develops a laser-like focus, undiminished by the rigors and challenges of training. In short, rather than coming to taekwondo, they become taekwondo.


Furthermore, discipleship often exceeds the boundaries of loyalty, bordering instead on obsequiousness. To outsiders, a close aid to the standard bearer can appear to obviate his or her own identity in the support of their senior. Friction and criticism may arise meted out by those less worthy of the station. This situation, supported by historical precedence, is to be expected and, ultimately, endured.


So, given the almost divine characteristics that flirts with the impossible associated with discipleship, what are the benefits of this noble, yet subservient, condition?


Notably, the disciple is assured of instruction uncorrupted by misinterpretation. That is to say that the individual is not learning technique from a string of instructors originally taught by the master. Instead, they are benefiting, as mentioned earlier, from direct transmission of skill, sometimes taking on even the most trivial of the master’s idiosyncrasies. Metaphorically speaking, just as a document losses integrity over the course of successive copies, so frequently will technique. This first-hand communication of knowledge - physical, spiritual and intellectual - is perhaps the most important advantage of discipleship. Through total immersion in the art, the disciple becomes a sturdy link in the great chain of martial arts knowledge. They share in a legacy by association and through martial action. The disciple virtually becomes a vessel containing the original essence of the master’s teachings and, through osmosis, will be expected to carry this legacy forward in perpetuity.


Nonetheless, there is an additional variable in this equation: is the master eminently deserving of and justified in receiving disciples? Is the leader, not being possessed of sainthood and still capable of misjudgments, worthy of unquestionable loyalty and respect by an apprentice?


While this is murky territory to trample in, and since the Western mind is a questioning mind, there are several signifiers that can be utilized in identifying a master truly worthy of an egoless devotion on behalf of the journeyman. First, examine past actions. Look closely at the deeds and not merely the words of the one in which years of devotion will be invested. Average these out, however, underscoring significant triumphs while down playing benign human traits or frailties. Personally speaking, I recall my astonishment when I discovered, while training in Korea, that our masters smoked excessively and drank alcohol in the evening with abandon. I was young and immature then and did not fully appreciate the Eum and Yang of life as I do now, being advanced in years. These men - great masters - reflecting a generation of hardship and war, were simply living their lives as was customary within the parameters of their society. Yet, from morning till night, each day, they had every intention of teaching traditional taekwondo with total conviction and accuracy. And, they did. In these investigations, do not confuse mundane behavior with pathology.


Additionally, interrogate intentions. Martial arts institutes and masters are not regulated as are other professions with the exception of guidelines suggested by various, legitimate organizations including the Kukkiwon, WTF, ITF, ATA, USTA, WTA, TAGB and the GBTF. Therefore, in an effort to ferret out unbridled greed, If invited, the serious student of taekwondo must ask: Do dollars trump tradition in this potentially honorable relationship? Is the aim of the master’s instruction to teach taekwondo, or is to manipulate and perpetrate odious sales tactics in the practice of take-my-dough? And finally, is the senior demanding minions and serfs, or are they earnestly searching for a few elite students on whom they may imprint a lasting stamp of authenticity?


Today, when we consider the concept of discipleship, we reflect on fusions of individuals such as General Choi Hong Hi and Tae Hi Nam, Dr. Un Yong Kim and Rhin Moon Chun, Gichen Funakoshi and Osamu Ozawa, Jigoro Kano and the Four Kings, and perhaps most prominently, Ip Man and Bruce Lee, just to name a few. Considering the long standing relationships between these men, discipleship may at first appear to be a long, lonely and arduous road. Yet, in truth, it is a two-way street; for example, Jigoro Kano, during the early years of the Kodokan, provided room, board and care for his disciples, all with funds from his own pocket. So, regardless of the effort sustained, trust in the master and his or her ultimate desire for the student’s well being is crucial. It must be realized beforehand that not every training session or personal interaction will result in contentment. Discipleship will demand a pledge to a long and lasting relationship that will range across the peaks and valleys of progress and disappointment. No patch will ever be embroidered with the term disciple. In fact, the phrase may never even cross the lips of the teacher and student involved. Nevertheless, when this special bond develops, cemented by a mutual desire for technical and philosophical preservation, it will become obvious. To serve when called insures continuity; tradition is in need of worthy vehicles in order to advance and there are praiseworthy mentors waiting to shift them into drive.