Nurses, soldiers, police officers and baseball players all have one thing in common; they wear uniforms. A uniform distinguishes the wearer from others while at the same time, by its very nature, largely unifies a group of individuals within a profession or organization. Aside from acting as a symbolic garment, uniforms tend to serve other purposes as well. They often 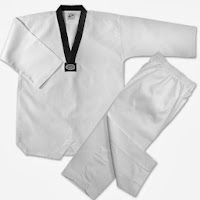 are well suited to reflect the work required by the individual. For instance, uniforms worn by fire fighters are uniquely constructed to avoid injury. Likewise, the clothing favored by surgical doctors emphasizes cleanliness and the sanitary conditions necessary to repel infection. Uniforms can also minimize distraction as evidenced by those worn by youngsters in some private schools. So, it should come as no surprise that people practicing classical martial arts within an institutional setting, are required to wear uniforms.

Subscribe to Totally Taekwondo Times magazine
Posted by Chosun Taekwondo Academy at 10:33 AM