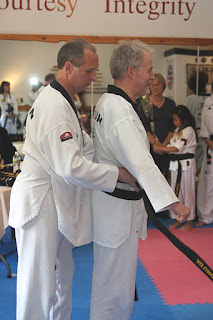 
One spring day in 1997, just before beginning a vigorous training session at the Richard Chun Taekwondo Center in New York City, I sat with Grandmaster Chun in his office discussing several issues relating to school ownership. Being the benevolent and forthcoming man that he is, Grandmaster Chun was never one to hold back valuable information from his disciples.
The conversation on that warm afternoon centered on my question as to why he chose not to display photographs of his many black belt students on the walls of his Upper Eastside dojang. The root of my query evolved from observations I had made while visiting various schools here and in Korea, the homeland of tae kwon do. At one dojang locally, I had noticed a cluster of color photos depicting what appeared to be the location’s entire population of black belts; there wasn’t many, but they all seemed to be represented, including the master instructor. Likewise, while training at the Korean National University for Physical Education or KNUPE, in Seoul, South Korea, as well as other noteworthy training facilities in the “land of the morning calm”, I was impressed with row upon row of proud, young black belts frozen in black and white images that stared down at me from frames firmly secured above the mirrors that ran the entire length of the dojang. Tributes of this sort seemed to add an air of heritage and permanence to not only the institution itself, but also the sacred training floor upon which we were about to stand. And so, almost two decades ago, shrouded in my naiveté’, I was confounded as to why my kwanjangnim did not share in this practice.
Without ever meeting Grandmaster Chun, one could not be familiar with his humble, gracious demeanor. He is unyieldingly courteous and disarmingly kind in his approach; except, of course, when he is standing in class before a large group of students. It is then that his ferocity and passion for tae kwon do quickly becomes apparent. Nevertheless, sitting at his desk across from me that day, he paused seemingly in deep reflection before answering. I trust that I am not breaking a confidence when I share his reply. Kwanjangnim looked up and said “If I were to mount photos of every black belt that I have graduated across the years at this school alone, not only would they fill every available wall, but a real danger exists that I would weep for those who have left.” With that statement, I truly began to understand the deep and singular relationship that exists between a worthy master and his loyal students.
Read entire column
Posted by Chosun Taekwondo Academy at 2:12 PM