The Evolution of Tae Kwon Do Poomse, Hyung and Tul 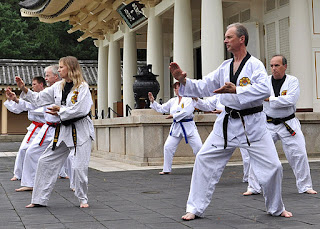 Long before the advent of sport sparring and the invention of modern safety gear, in a time when to fight meant to defend one’s life from almost certain death an ingenious method of transmitting martial arts skills from venerated master to loyal disciple was developed. Legend has it that experienced warriors returning unscathed from combat, a testimony in and of itself to their martial prowess, mimicked techniques used to vanquish opponents on the field of battle for the benefit of those less qualified in the ways of war. This ritual may have been practiced around a campfire, in secret gardens or in the incense-filled halls of ancient Buddhist temples lending credence to the notion that the dynamic practice of formal exercises has existed for centuries. Several examples demonstrating this concept can be traced back to antiquity with roots found in primitive works of art and ancient yogic postures originally intended to promote health and core strength in sedentary clerics.
Today, poomsae, hyung or tul - all culturally-specific terms for Korean martial arts patterns - can be defined as choreographed sequences of techniques aimed at defeating multiple attackers originating from various directions. They can also be thought of as “quality shapes of strength” representing the comprehensive catalog of Traditional and Kukki Tae Kwon Do skills. Moreover, poomsae demonstratively symbolize the essence of the art and can be distilled down into two discrete categories – those created in modern times as opposed to those tracing their pedigree to primordial practices.
In an effort to quantify the significance of this division, we must first appreciate that the formal exercises found in Tae Kwon Do today were not created in a vacuum. Rather, an analysis of the historical evidence at hand reveals that empty-hand fighting arts, in conjunction with their associated formal exercises, developed naturally across continents as various cultures adapted to cope with the dangers posed by increased trade and human aggression accompanied by imperialist desire. Still, the need to practice prearranged chains of combat tactics in a relatively relaxed environment devoid of mayhem and death was apparently universal.
In his book, Moving Zen, Shotokan karate-do practitioner C.W. Nicol describes forms practice as “a dynamic dance; a battle without bloodshed or vanquished.” He further goes on to say that, “we are somehow touching the warrior ancestry of all humanity” and that “of all the training in karate, none is more vigorous, demanding or exhilarating than the sincere performance of kata.” From this we can see that poomsae training, if approached in a traditional manner, not only cultivates defensive and offensive proficiency coupled with ki (internal energy) development, but establishes a profound link with masters of the past who clearly did not perform formal exercises merely for physical fitness as some would claim, but as a means of collating hard-earned martial skills often fostered on the field of battle or in the supercharged atmosphere of some distant training hall, for the benefits of students across the centuries.
Read entire article
Posted by Chosun Taekwondo Academy at 11:01 AM