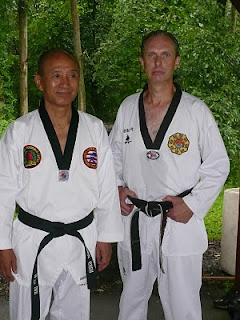 Over the past year and a half, our country has found itself in the bull’s eye of a financial crisis. Across the nation mortgages go unpaid, students are finding it difficult to secure college loans, and investments made in the hope of attaining long-term prosperity are evaporating. These challenges, coupled with others we are likely to experience in the coming years, cause many of us to ask just what real wealth is.

Is real wealth securing a job we are confident is bulletproof, only to eventually find it exported to a foreign land? Is real wealth measured by money in a bank exposed to the whims of an erratic global economy? Or is it something more…something that is neither minted, nor interviewed for?


We who diligently practice traditional tae kwon do are fortunate in that we realize an awakening of sorts. Not in a religious sense, although at times it can be of a spiritual nature, but in a way that cultivates passion and wonder; a desire to enthusiastically pursue something bigger than ourselves. Through tae kwon do training we develop courage in contrast to danger, a trait that in an uncertain world can be translated as the strength to break through adversity, just as we would a brick or pine board during a promotion test. In the big scheme of things, these virtues may seem small. But when the standards many of us thought for so long to be unshakable begin to crumble, courage, strength and the self-assurance to overcome doubt surely counts as real wealth.


Furthermore, real wealth is seen in the eyes of our young students who are developing confidence along with patience and self-control. Compassion, too, is a characteristic the martial artist must nurture as evidenced by martial arts schools around the world promoting fundraisers that directly benefit their local communities. Recently our Leadership Team, a group of youngsters within the Chosun Taekwondo Academy who aspire to positions of greatness, raised over a thousand dollars for our local ambulance corp. From this it quickly becomes evident that traditional tae kwon do, if practiced sincerely, is not simply about kicking and punching as it may appear on the surface. More correctly, it is about investing life’s coffers with riches that will reap dividends far into the future, immune to greed and self-interest. It is about developing ethical and physical self-defense that will result in real wealth.


Yet, one may ask, how can a discipline resonating with potential violence be expected to imbue such virtuous qualities? The answer to this question depends on the manner in which tae kwon do is taught, and subsequently embraced, by the student.


If the practitioner is to profit from the real wealth associated with martial arts training, they must first be exposed to the vast mosaic that comprises the traditional tae kwon do curriculum. This, clearly, is the responsibility of an experienced instructor acting as mentor and purveyor of the accumulated knowledge or wisdom residing at the core of traditional tae kwon do. The teacher must be selfless in this transmission, putting their student’s well being in the martial arts above all else. They must infuse respect, discipline, and a genuine appreciation for accomplishment, coupled with authentic technique. For example, advanced black belts may find it difficult to recall the first moment the realization set in that they were capable of effectively defending themselves; or the sense of connection experienced with the discovery that they share a martial tradition with over 70,000,000 fellow tae kwon doists worldwide. Moreover, learning how to remain positive when adversity strikes, in tandem with a healthy disregard for the toxic effects of self-criticism, represents an annuity far in excess of those in a bank dissipating before our eyes. These dividends of training, conveyed by a worthy instructor, are significant and act as valuable currency in the face of emotional recession.


But the legal tender of traditional tae kwon do is not printed exclusively on the paper of virtue, but matures on a principle of action. The Five Tenets of Tae Kwon Do – courtesy, integrity, perseverance, self-control and indomitable spirit – lay the foundation for the art, but the structure that houses the real wealth associated with our training must be built of materials forged by orthodox technique. Clearly, due to its Olympic status, many practitioners currently focus primarily on the combat sport element of tae kwon do, an aspect steadfastly developed through the efforts of the World Taekwondo Federation. However, by highlighting the overarching requirements for successful competition in the ring, many of the techniques and philosophical underpinnings associated with self-defense, including hand techniques, poomsae, one-step sparring, Ki or internal energy development and meditation, have been subjugated or forfeited altogether. These sadly overlooked, yet quintessential components of traditional tae kwon do constitute earnings that must be presented in their entirety if the student is to be the recipient of the real wealth vested in this authentic martial discipline.


Likewise, any savvy businessperson expects a substantial return on their investment. And just as yields are often linked to risk, so it is in the martial arts. However, the risk that comes with the inculcation of traditional tae kwon do doctrine is not necessarily related to physical injury as the layperson might expect. On the contrary, if the practitioner pursues the way of tae kwon do with their true heart, then the only hazard they risk is the positive effects of profound enlightenment; a reemergence of the passion and purpose sadly eclipsed by age and the cynicism that frequently accompanies it. The Buddhist concept of beginner’s mind dictates that we approach daily life with a fresh outlook while fending off brittle notions or narrow preconceptions. Subsequently, the real wealth manifest in the fresh worldview gained through the sincere practice of traditional tae kwon do and its underlying philosophy cannot simply be purchased in a monetary sense but must be earned with sweat, determination, and supreme focus.


Without a doubt, across the months and years ahead, our great nation will shake off the onerous yoke of greed perpetrated by a shameful few. The specter of fear and doubt present now will flee in the face of hope. As Americans we have been through times such as these before. Our resilience as a people will triumph. Yet those of us who train in the martial arts will find this transition less painful supported by the real wealth we have accrued through the unquestionable virtues of traditional tae kwon do.
Posted by Chosun Taekwondo Academy at 7:38 AM