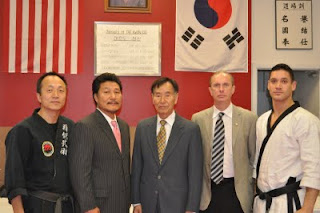 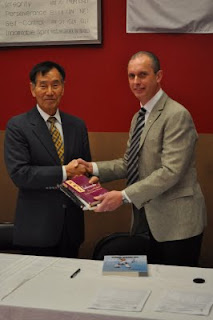 Last Saturday, December 5th, I enjoyed a truly singular experience. I was invited by Grandmaster Kim Bok Man to officiate at his school's promotion test in Roseland, New Jersey. Sitting at the head table with four Korean grandmasters, me being the only Occidental, brought to mind the wonder I felt at my 1st dan black belt test many years ago when I looked out at the masters in attendance. Now it was my turn and I was honored and humbled simultaneously. I have judged many belt tests at CHOSUN and other dojangs throughout America. But this was a very special moment. Having referenced my three books, the grandmasters frequently asked me to comment and pointed out to the students that we at CHOSUN truly understand the meaning of respect for the history and techniques of traditional taekwondo.
In the 1950s and 60s, Grandmaster Kim, along with General Choi Hong Hi and Tae Hi Nam, were the founding fathers of ITF Taekwon-Do. In fact, Grandmaster Kim was responsible for developing 16 of the 24 tuls, or forms, of ITF Taekwon-Do. Following what was an excellently executed test, Grandmaster Kim invited me out to lunch. I sat and listened intently as he spoke about his early days of training at age seven while Korea was under the yoke of the Japanese Occupation. Korea's enemies thought nothing of slaughtering an individual if found practicing martial arts. These were hard times indeed! I was riveted when he spoke about the call from Army Headquerters commanding him to report to General Choi's office and how the General recruited him to teach Korean martial arts. Then, he told me of the moment, on the heels of a demonstration for President Rhee, when General Choi ruminated about what to call these arts...he chose "Tae" - jumping and kicking, "Kwon" - destroying with the fist, and "Do" - The Way. Sitting there, I felt as if I was speaking with George Washington about the American Revolution; a first hand account from one of the leaders who was there!
We are so fortunate to have grandmasters like Dr. Richard Chun, Kim Bok Man, Hee Il Cho, Sijak Henry Cho, Jhoon Rhee and Son Duk Sung to draw from at this time. Respect these men and learn their histories for they are the first generation of our art.
Kamsahamnida!
Master Cook
Posted by Chosun Taekwondo Academy at 1:23 PM