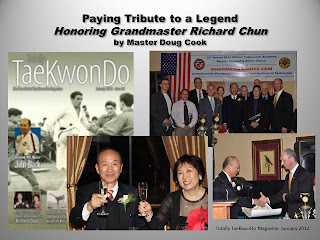 Tae Kwon Do, the traditional martial art and Olympic sport of Korea, is an inheritance; an art handed down from venerable master to worthy disciple over the decades. Since its official inception in 1955, evolving from a disparate collection of fighting styles to the most popular martial art in the world today, the discipline has grown, overflowing the borders of its native land. Through an ingenious process of standardization introduced during its formative years by the Korea Taekwondo Association, Tae Kwon Do has today become unified and transferable wherever it is taught, flooding the globe with the physical and philosophical principles it resolutely promotes.

Yet, as students of Tae Kwon Do in America, we are largely indebted to five great masters who, in the 1960s, emigrated from Korea to the shores of this great nation with the distinct purpose of transmitting the heritage of the art on to others deserving of its virtues. Among these vanguards were Ki Whang Kim, Son Duk Sung, Sijak Henry Cho, Jhoon Rhee and Rhin Moon Richard Chun. Two are no longer with us while three of the original five continue to vigorously represent Tae Kwon Do today.

Sadly, not every Tae Kwon Doist was given the prospect of training under one of these remarkable men. Yet, as providence would have it, we of the United States Taekwondo Association and, subsequently, the Chosun Taekwondo Academy, have been afforded that singular opportunity through our close association with one of the original five – Grandmaster Richard Chun.
Read entire article... (Totally TaeKwonDo Magazine issue 35 page 7)
Posted by Chosun Taekwondo Academy at 2:21 PM