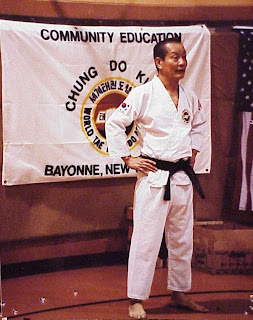 Grand Master Duk Sung Son, 88, of Newport, RI died March 29, 2011 at Newport Hospital. His funeral was held on April 4. Donations in his memory may be made to the Alzheimer’s Association, 245 Waterman Street, Suite 306, Providence, RI 02906.
Grandmaster Son began studying Tae Kwon Do in the 1940’s under the leadership of Won Kuk Lee in Korea. Won Kuk Lee was the founder of the Chung Do Kwan (school of the Blue Wave). Grandmaster Son quickly rose to the black belt level and onward to the master level and assumed the leadership of the Chung Do Kwan in 1950. In 1955, Grandmaster Choi, Son and other leading Korean martial arts masters gathered together and originated the name Tae Kwon Do for the Korean national martial art.
In 1963 Grandmaster Son and several of the Chung Do Kwan institute masters (J.B. Chung, and N.Y. Chung among them) came to the United States. Then in 1966 Grandmaster Son united the Chung Do Kwan masters under the World Tae Kwon Do Association (WTA). While in the United States Grandmaster Son has taught at West Point, Yale, Pricenton, Brown, Columbia, New York University, Fordham, Stony Brook, and Providence. Fordham gave him an honorary Professorship. And he has also taught employee's of major corporations IBM and Chase Manhattan Bank. In 1965 Grandmaster Son recieved the Medal of Honor from President Park of South Korea. Major General John B. Conaway, director of the Air National Guard Bureau in Washington D.C. made Grandmaster Son an Honorary General. Omni magazine did an article on the top five U.S. Martial Arts Masters and listed Grandmaster Son as among them. Grandmaster Son retired in 2009.
The above information wa sgathered from Stark's Taekwondo of Augusta, GA. We thank you for this worthy tribute.
Posted by Chosun Taekwondo Academy at 5:33 PM