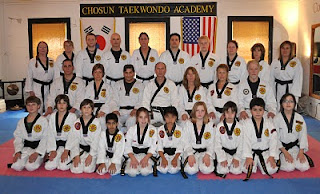 While most people were nestled all snug in their beds, a small but dedicated group of CHOSUN TAEKWONDO ACADEMY black belts were introduced to modifications in the Original Koryo poomsae by Master Doug Cook at their Sunday morning Black Belt Class on December 19, 2010. The poomsae will be detailed in an upcoming book authored by Master Cook and Grandmaster Richard Chun and published by YMAA of Boston. Originally created in the mid 1960s along with the remaining eight Yudanja series forms, Original Koryo has become a "hidden poomsae", rarely taught at dojangs around the world. This formal exercise which was replaced by the existing Koryo poomsae in the early 1970s, has fortunately been preserved by Grandmaster Richard Chun and transmitted to his students through the United States Taekwondo Association. The CHOSUN students are the first recipients of these significant modifications in Original Koryo which were executed in the name of standardization.
Posted by Chosun Taekwondo Academy at 5:32 PM