WTF and ITF Taekwondo - Two Sides of the Same Coin (Is Unification a Possibility?) 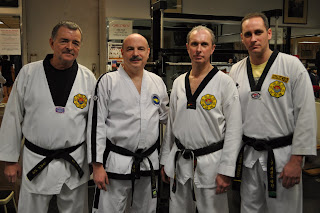 Recently, two of my students and I were invited to participate in a special class hosted by ITF practitioner Master George Vitale of Original Taekwon-Do in Brooklyn, New York. Although our styles differed somewhat, we were nevertheless reminded of the similarities both in technique and spirit. Taekwondo, the traditional martial art and world sport of Korea, is a miracle of unification. In the short span of less than sixty years since its creation in the 1950s, the founders and visionaries of this discipline have successfully elevated its status from a provincial defensive system geared towards the armed forces, to a common word in Western households where children and adults alike benefit from its many virtues. Yet, this was not always the case, for just as the Yin/Yang, the cornerstone of Taoist doctrine suggests harmony between two opposing forces, a group of dedicated masters — often at odds with one another — ultimately triumphed in uniting several disparate factions into a single, standardized entity.

As far back as 1946, attempts were made to merge the Korean martial arts while at the same time eliminating foreign influences that were injected during the Japanese Occupation from 1910 to 1945. Perhaps the most visible protagonist in this evolutionary process, however, was General Choi Hong Hi who, in the 1930s, began his training under Hong Il Dong. Hong not only taught his young pupil calligraphy but, due to his frail nature, began teaching him Taekkyon, the indigenous martial discipline unique to the Korean Peninsula. In 1937, the future “Father of Tae Kwon Do” was sent to Kyoto to further his education. Later, after settling in Tokyo, he continued his training under the direction of Gichen Funakoshi, founder of Shotokan Karate-Do. After being promoted to second-degree black belt, Choi and his associate, Byung In Yoon, began teaching Karate at the Tokyo YMCA.

General Choi is rightly credited with developing much of what we know today as traditional taekwondo along with its unique set of tul, or patterns, known as the Chang-Han series (originally a set of twenty tul with four additional forms being added in the 1970s). This was a direct result of his contempt for the Japanese and his desire to spawn a martial art with a distinctly Korean philosophy. However, his contribution to Tae Kwon Do, coupled with that of other courageous innovators, did not stop there.

If any date can be recognized as the birthday of taekwondo it would be April 11, 1955. It was on this day that a group of men sat in conference with the purpose of proposing a name for the loose confederation of kwans (schools) whose foundations were the Korean disciplines (among them Kong Soo Do, Tang Soo Do, Taekkyon, and Kwon Bop) that would come to be known as Tae Kwon Do. In attendance were General Choi Hong Hi, Yoo Hwa Chung, Son Duk Sung, General Lee Hyung Ku, Cho Kyung Kyu, Chung Dae Chun, Han Chang Won, Chang Kyung Rok, Hong Soon Ho, Ko Kwang Rae, and Hyun Jong Myung. Some were martial artists; others, financiers, politicians and military men. A record of this meeting states: “Choi recommends the name taekwon-do. He explains the name both literally and technically. Mr. Yoo says, “I completely agree with the name taekwon submitted by Gen. Choi. I think, however, it would be utterly significant that we have the approval from the president, Syngman Rhee, since giving a name to a martial art is so important. “All members unanimously agreed.”

During his tenure as president of the Korea Taekwondo Association, Choi traveled throughout Asia and Europe spreading knowledge of Tae Kwon Do. Acting as team leader to Kyo Cha Han, Jong Soo Park, Jae Hwa Kwan, and Joong Keun Kim, he arranged and presented frequent demonstrations depicting the effectiveness of his native discipline. Finally, on March 22, 1966, representatives of many nations met with Choi resulting in the founding of the International Taekwon-do Federation. What began as a group of nine charter members including Korea, Malaysia, Vietnam, Singapore, West Germany, America, Egypt, Italy, and Turkey, quickly grew to a global organization boasting thirty members in two years. Yet, even taekwondo, complete with its honorable and virtuous background is not immune to internal politics. Choi eventually fell out of grace with the Korean government, in part due to his insistence on demonstrating taekwondo in North Korea, and immigrated to Canada taking the workings of the International Taekwon-do Federation (ITF) along with him. While this organization flourished and continues to maintain a strong global presence, the torch of constant progress, at least in Korea, the homeland of taekwondo, was handed on to yet another of equal foresight and vigor.

If it can be said that General Choi Hong Hi was accountable for the early growth of traditional taekwondo, then it would be equally correct to say that Dr. Un Yong Kim, is responsible for the explosive acceptance of taekwondo as a world sport. Born on March 19, 1931, Un Yong, literally translated as “dragon above the clouds,” dreamed of becoming a diplomat in the service of his native land. This ambition was fully realized in 1965 when he was appointed representative to the 20th United Nations General Assembly after receiving his doctorate from Yonsei University two years earlier. An accomplished concert pianist fluent in five languages, Dr. Kim increasingly began focusing on the sports community while remaining in government service.

Following his election as president of the Korea Taekwondo Association in 1971, Dr. Kim and others felt the need for a centralized training center where practitioners from around the globe could gather collectively to train, test and seek advancement in the art of taekwondo. His efforts resulted in the building of the Kukkiwon, now the Mecca of Tae Kwon Do operations worldwide. Literally translated as “National Gymnasium,” the Kukkiwon is located atop a hillside in the Kangnam District of Seoul. Construction began on November 9, 1971, with the facility being inaugurated on November 30, 1972. Mirroring traditional Korean architecture, its humble exterior is deceptive in that it houses management offices, locker rooms, seminar space and a museum. But perhaps most importantly, aside from the large competition area that allows various national and university teams to test their skills against one another, it was at the time headquarters to the World Taekwondo Federation (WTF) established on June 3, 1973. This organization effectively replaced in South Korea the International Taekwon-Do Federation, the brainchild, as we have seen of General Choi Hong Hi. Its origination was precipitated following a meeting of the thirty delegate countries that had participated in the First World Taekwondo Championships held at the Kukkiwon in May of 1973. At this meeting Dr. Un Yong Kim was elected president of the new federation.

In 1988, a monumental event took place that solidified taekwondo as a world sport in the eyes of the general public. To the delight of its citizenry, Seoul, South Korea, played host to the 1988 Olympic Games. Since the country chosen to sponsor the event is traditionally entitled to choose a demonstration sport, the Korean leadership, including Dr. Kim, naturally chose to display Tae Kwon Do with great success. Row upon row of seasoned taekwondo practitioners performed basic techniques and breaking skills on the field of the newly built Olympic Stadium that was filled to capacity. This honor united the hearts and minds of the Korean people and catapulted their national martial art to world prominence. Dr. Un Yong Kim, who in 1992 became vice president of the International Olympic Committee, continued promoting Tae Kwon Do on an international level through his affiliation with various sports organizations. It is largely due to Dr. Kim’s tireless efforts through the WTF that Tae Kwon Do debuted at the 2000 Sydney Olympics as a full-medal Olympic sport.

Presently, with its new headquarters at 4F Joyang Building 113, Samseong Gangnam-gu, Seoul, South Korea, the World Taekwondo Federation acts as a clearinghouse for tens of thousands of applicants throughout the world seeking legitimate black belt certification through their national governing bodies. Unquestionably, through the stewardship of its many officials coupled with its 182 member nations, Taekwondo remains the only martial art in the world today, other than Judo, with official Olympic status. Naturally, there are numerous individuals within our borders and throughout the world who have dedicated their lives to promoting the Korean martial arts both in a traditional and sportive manner. Great masters such as Richard Chun, Sijak Henry Cho, Sung Duk Son, Won Kuk Lee, Sang Kyu Shim, Jhoon Rhee, and Ki Whang Kim, to name a few — names etched forever in the bedrock of taekwondo — will never be truly repaid for the contributions they have made to the art.

It is hard to say if ever the WTF and the ITF will join forces. Yet the advantages of unification are tempting. With the loss of Grandmaster Tran and the splintering of ITF factions following the passing of General Choi, discussions and rumors abound. Subsequently, in a world of constant change, who is to say what the future of taekwondo holds?
Posted by Chosun Taekwondo Academy at 10:43 AM